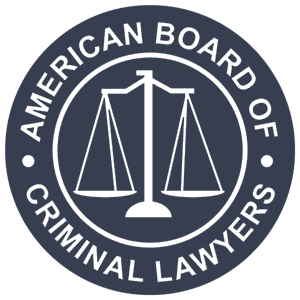 Logo of the ABCL
Website
Contribute to the information on this page: Suggest Edits
About News People Contact

American Board of Criminal Lawyers (ABCL)

The mission of ABCL is to protect the preservation and exercise of fundamental rights and freedoms for those accused of crimes while promoting excellence in the practice of criminal defense.

Board of Governors and Officers

Lawrence I Kazan
Board of Governors
Phoenix, AZ

Jennifer M Lukemeyer
Board of Governors
Indianapolis, IN

More About the ABCL

Admission into the American Board of Criminal Lawyers is by invitation only. Joining the group requires recommendations from current Fellows, a reputation within the legal community of exceptional ethics and litigation skills, and substantial major felony trial experience.

The Fellows in ABCL have extensive experience with complex criminal matters such as white collar crime, criminal appeals, and federal crimes as well as other areas.

Requirements for admission include having at least ten (10) years of criminal trial experience. Attorneys must have tried at least fifty (50) major felony cases to verdict and win at least thirty-five (35), at least five (5) of which being capital or life sentence cases.

The benefits of membership in the ABCL include fellowship with many of most recognized criminal defense and trial lawyers in the country. Fellows meet at events scheduled throughout the year at various locations throughout the world.

Publications of the ABCL

The ABCL publishes a monthly newsletter for members called "The Roundtable" which highlights signification events impacting the practice of criminal defense and highlights the accomplishments of the Fellows.

The ABCL keeps many of the details surrounding the events confidential. Events include meetings and social gatherings for both the Fellows and their significant others.

The American Board of Criminal Lawyers (ABCL) was founded in June of 1978 by a criminal defense attorney in San Francisco, CA, named Nathan Cohn. Born on January 18, 1918, Nate Cohn died at the age of 91. After graduating from the San Francisco Law School, he became an attorney in 1947 and practiced law for more than 53 years.

During his career, he represented the rich and famous including Duke Ellington, Artie Samish, Bob Crosby, and Popo the Clown. In the process, he became a celebrity himself with the media following many of his cases as front page news. He once won 13 acquittals in a row. During his career, he tried more than 200 cases, both civil and criminal.

Nate Cohn was honored by the San Francisco Trial Lawyers Association SFTLA with the Lifetime Achievement Award. The San Francisco chapter of the American Board of Trial Advocates awarded him the Don Bailey Award. He was also elected to the San Francisco Law School Hall of Fame. Nate Cohn served as the ABCL's first president in 1980. In 2006 he wrote his memoir entitled "Murder He Liked."

Directory of Criminal Defense Lawyers in the United States

Lawyer Legion maintains a national directory of criminal defense lawyers which includes both ABCL members and non-members. To help the public find the best choices when searching for a criminal defense attorney, Lawyer Legion recognizes attorneys for their involvement and leadership within the ABCL and other professional associations. This includes recognition for ABCL fellows who have updated their Lawyer Legion profile with information about their involvement with the ABCL.

Use this directory to find a criminal defense attorney in your local area. Start by choosing your state from the list below.